Welcome aboard The Totally Electric “DeepSeaker”! 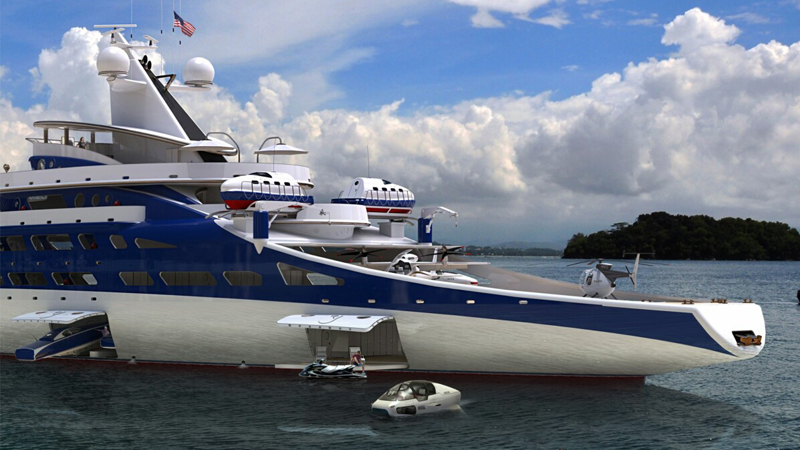 Welcome aboard The Totally Electric “DeepSeaker”!

Lifestyle’s Roxanna Cella had a chat with the CEO of ISpace2o, Giuseppe Carusi, about their Submergible Hydrofoil.

Is DeepSeaker a submarine or hydrofoil?

– This is actually a boat or a Hydrofoil that can submerge, although it’s called a Submersible Hydrofoil, that being the reason. The first of its kind. Well… actually the first kind of vehicle that can actually speed on the surface like a speed boat and truly be able to dive like a submarine. So it’s a very versatile craft that can do both! But primarily it was born as a boat that can carry 4 passengers on the surface like a speed boat and then has the capability of diving down 50 meters of depth. 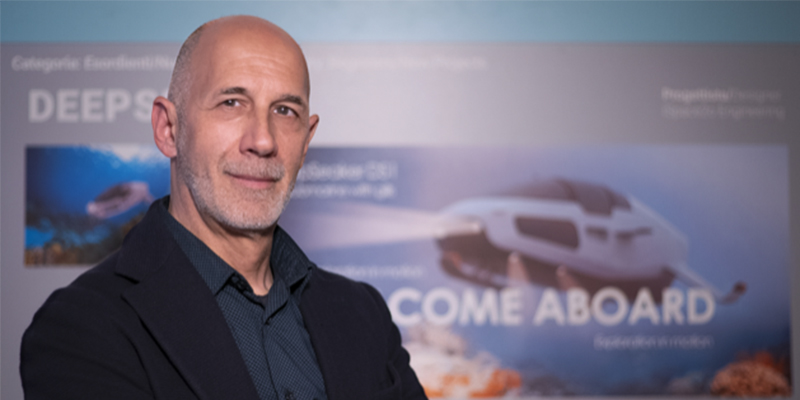 – It is… Let’s say the idea was to have something in the automotive style that could accommodate a family of 4. Unlike other submarines or professional subs which are on board yachts right now. You want to drive this by yourself! You don’t want a pilot to take you down to the depths. Of course we thought of it as a touristic vehicle, so you don’t need to go down into the abyss but only down to a certain range where there is still light from the sun that’s shining through so you still can see where you are going. So that’s why we limited it to the 50 meter depth range, this also enables us to use lighter material thermo plastics and to build a craft that is very performant! But of course it’s not only performant, it’s totally electric so it’s ecological, it’s green, as in “green power” and many, many more innovations including the motors themselves! 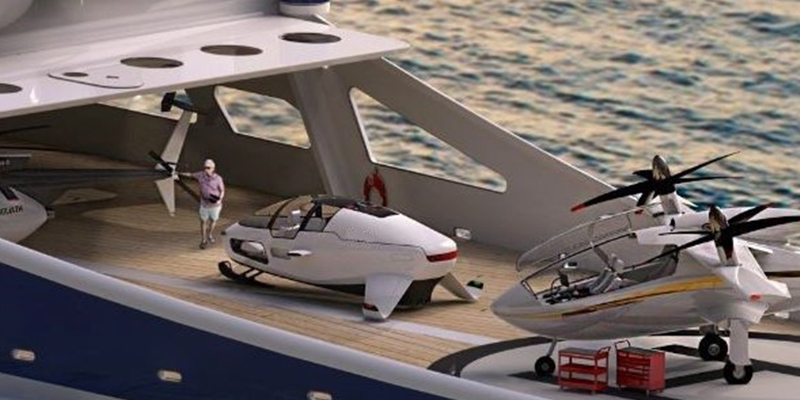 How did Giancarlo Zema come up with the designing idea of submarine?

– Roxanna, I have always had a passion for the sea, I’m a sailor and have lived by the water all my life. So working on motors in boats and such has been a natural for me. But as a certified diver I have always felt there was a need for something that could carry all people underwater in a safe way including people who have health problems. This vehicle makes it available to just about everyone to just get on board and enjoy the water world. In a very safe and comfortable manor. Of course the price tag is very important. This is a very professional craft made in a very, very expensive professional way. Not only is this for luxury yachts, but we believe cruise lines and cruise ships would love to offer an underwater experience to their passengers aboard the “DeepSeaker” on every cruise. Price 1.5 million Euros per DeepSeaker. 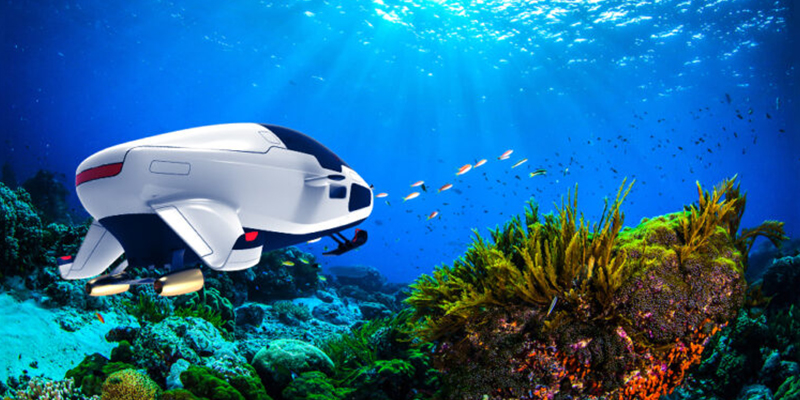 Is the Deepseaker sophisticated breathing system?

– Normally submarines will carry canisters of oxygen and an internal closed circuit rebreather system with scrubbers to clean the air from Co2. This is the same as ours, but our canister will be much smaller because of a patented system we have, designed exclusively by “like a fish” a recovery system that extracts a breathable oxygen mix directly from sea water. Well… we are under experimentation for this system that recovers 2% of clean oxygen that is needed to re-inject into the loop.

How long can Deepseaker stay under water?

– We will be able to cover that and it would allow us to stay down longer than a traditional sub or a tourist sub, you may know and recognize it with the big bubble. But on the safe side I would say that we will disclose after testing this data.

What did Deepseaker and Italian Government have put together?

– We have been awarded a grant which is actually a financement from the Italian institution called Invitalia which is a Governmental entity that funds innovative start-ups. We were awarded 1.5 Million euro dollars for the development of the first prototype of the “DeepSeaker,” Right now we are in the phase # 2 of the project out of 3 phases. 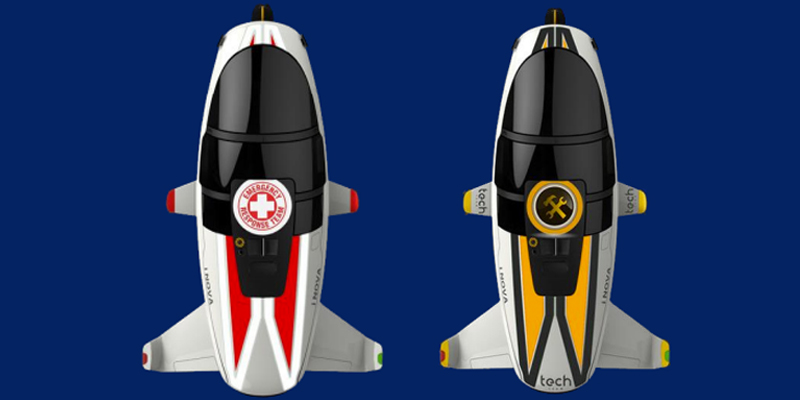 Can Deepseaker be a ship for search & rescue?

– This is a multipurpose vehicle as I said before, this could be used for patrolling the coast, scientific research, Underwater ecological surveying and as you mentioned, of course search & rescue and a perfect sea ambulance! The DeepSeaker goes amazingly fast on top of the surface and IT CAN DIVE! We are open to specific mission vessels, if you have a specific usage for this technology we would be happy to design it… engineer it… produce it. Specific requests are welcome as far as missions are concerned.

Does a Deepseaker need a Collision Advanced System?

– Ok, actually underwater you won’t need a collision avoidance system. We are talking about 5 to 6 knots limited speed underwater… very slow going! Bumping into something at that speed is highly unlikely even to scratch it. So really there’s no need of advance warning. Over the water the same rules apply to traditional GPS system on boats. remember you are driving a boat, so you would have to follow the same rules as every one else.

What kind of experience can Deepseaker give?

– Absolutely, when we designed this we kept in mind as a priority the eco system. We are using motors that are very particular, we are using DEEPSPEED motors made by Sealence. (This groundbreaking propulsion system could jump start the electric boats revolution) they are located out of Italy. These motors are turbines that actually move water, these props can’t hurt fish or sealife. “They are very powerful ” and they are attached on the outside of the craft. There are no motors on the inside of the boat, only batteries, so transferring current from the batteries to the motor… These motors are an absolute innovation! And better yet, they are underwater eco-friendly. Now the first version will work on batteries, but we are already thinking and working towards a hybrid hydrogen powertrain for the future. 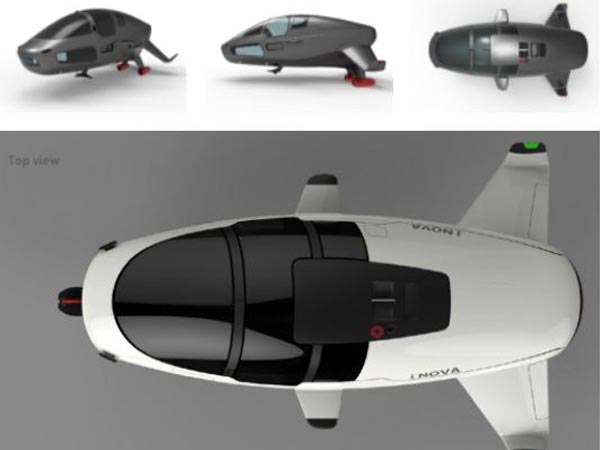 When is the Deepseaker launching officially?

– Yes, absolutely! Finishing the first prototype by August of this year 2022. Then we will be undergoing testing to debug it and bring it up to its final prototype. Then Giancarlo Zema will dress it up. Giancarlo is the exclusive designer contracted for the iSpace2o DeepSeaker project. He will be designing the final total aesthetics of the “DeepSeaker” that will go to market. With the final look, we will be ready for production. So we hope to show it in the next Fort Lauderdale boat show in Florida We also may bring in a full scale mock-up to take around the country to show.

– We are looking to keep it within a 3 ton weight factor and 5 meters long which makes it small enough to put on a small boat trailer and carry it. It can easily be lifted by a small crane as well. So you can put the craft in the water easily and virtually tow it with your car. It also can be docked in any port so you can use it as a a power boat. Just hop in it any Sunday and take the DeepSeaker for a ride.

Are Deepseaker taking any pre-orders?

– Yes, we are ready to to take pre-orders. Delivery 2023. Actually the quicker the better, we are anxious to start production.

The biggest factor in this is it’s user friendly, it has all the hardware in a separate sealed compartment so in the cockpit you will have only comfort and a big digital screen dashboard which is fully interactive… most of the functions will be guided by an A1 I would call it, as we are into machine learning. We want the craft to be able to make the decision weather to dive or not based on the functions that it analyses before the dive. This craft is very safe! The craft will be able to override the pilot in case of any kind of major problems underwater and take you autonomously back to the surface…. So all you need to do is sit back, relax and enjoy the ride!

AltTech Industries is dedicated to developing and distributing innovative alternative health and renewable energy products that fundamentally improve how humans live and thrive.